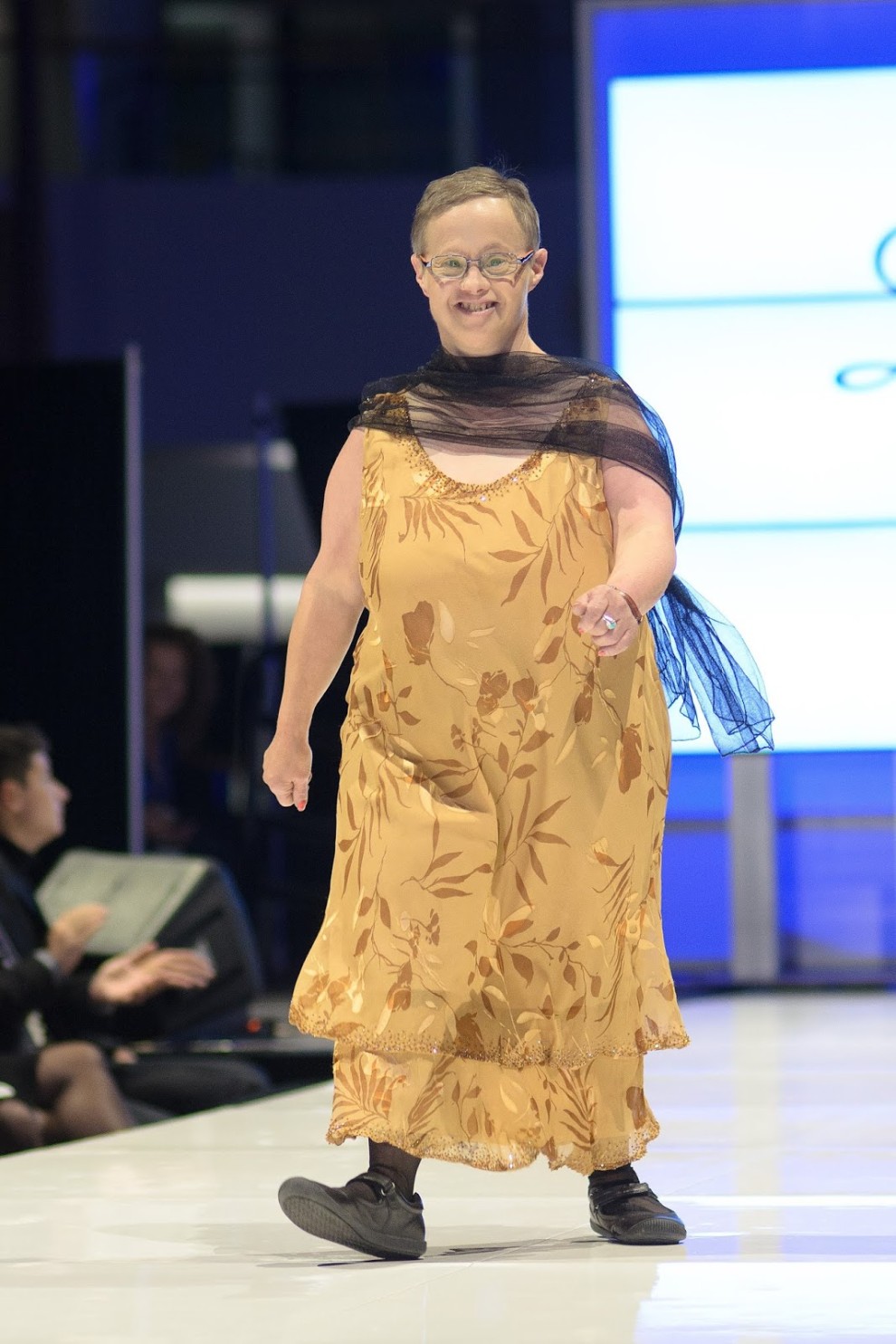 Tamir is ‘fiercely fabulous for inclusion’ at second fashion show

Over 400 guests packed the Grand Hall of the Canadian Museum of History, November 4, for Tamir’s ‘Stepping Out in Style 2.0.’

Tamir, the Ottawa agency “dedicated to assisting people with developmental disabilities realize their potential in a supportive Jewish environment,” was proud to present Ottawa’s “only fashion show featuring diversely-abled models, professional models, and community leaders,” for the first time in 2017. The event was so well received by the community that it has now become a much anticipated biennial fundraising and public awareness event. All funds raised go directly to support Tamir programs.

Joshua Finn, a member of the Tamir Board of Directors, gave the evening’s opening remarks.

Tamir, Finn said, has been “life-changing” for his family, as his brother Jordan has received support from the organization since 2008. “Knowing that Jordan has excellent caregivers has been a huge relief for my parents. They also have the peace of mind that Jordan not only has his basic needs met, but is living a fulfilled life.”

Media personality and fashion entrepreneur Jeanne Beker and Jamie Greenberg, a Tamir participant, were MCs for the evening. Jamie describes his role as “a unique opportunity. I was honoured to be asked to MC the show and thrilled to meet Jeanne Beker. The night of the show it was nice to see my friends from Tamir all dressed up and excited to walk the runway. I was thrilled to look out into the audience and see my parents as well as so many other people from the community supporting Tamir.” 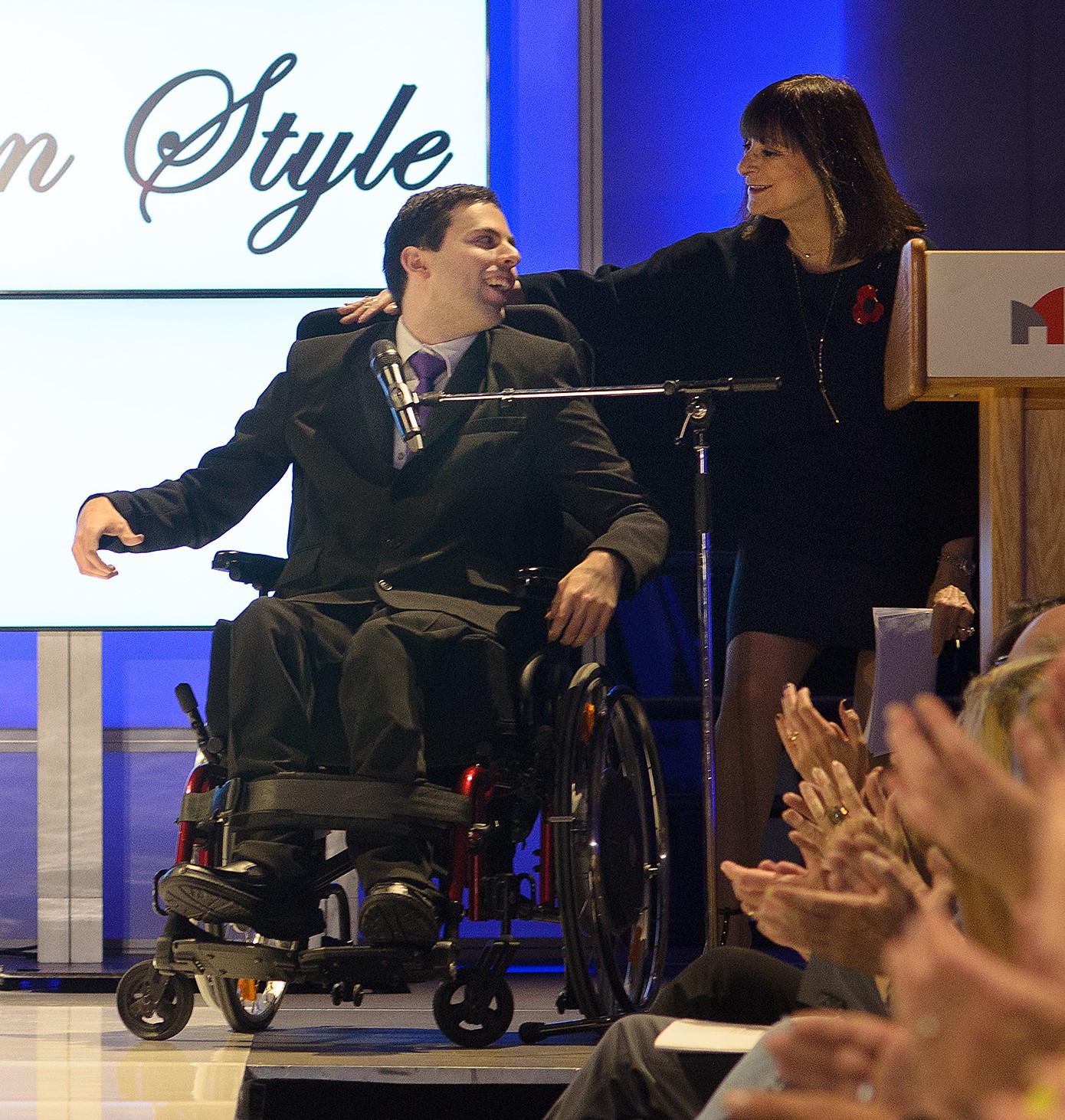 MCs Jamie Greenberg (left) and Jeanne Beker share a moment on stage during Tamir’s Stepping Out in Style 2.0, November 4, at the Canadian Museum of History. (Howard Sandler)

More than 45 models took to the runway to strut their stuff, wearing a variety of outfits from fashion designers Desigual, Dominique Bridal, IZ Adaptive, Kania, Richard Robinson and Vivati.

JOIN co-founder Madelaine Werier participated in the fashion show along with her daughter, Rachel. During the summer, Werier’s son Sammy was able to attend camp thanks in part to a ‘shadow staff’ provided through Tamir’s ‘Keshet for Kids’ initiative. Werier said part of the fun was in the preparation. She and her daughter attended three practice runs held at the Soloway Jewish Community Centre, where the participants were coached on “how to demonstrate confidence, how to walk and how to choose a pose they liked.”

For the evening’s musical entertainment, Juno-nominated folksinger Craig Cardiff teamed with Tamir’s Neshama Choir, coordinated by Deborah Davis, to sing “Love is Louder,” “Safe Here,” and “True Colours.” A special video was also part of the events, with testimonials from families who have benefited from the life-changing supports Tamir has been able to offer their loved ones. 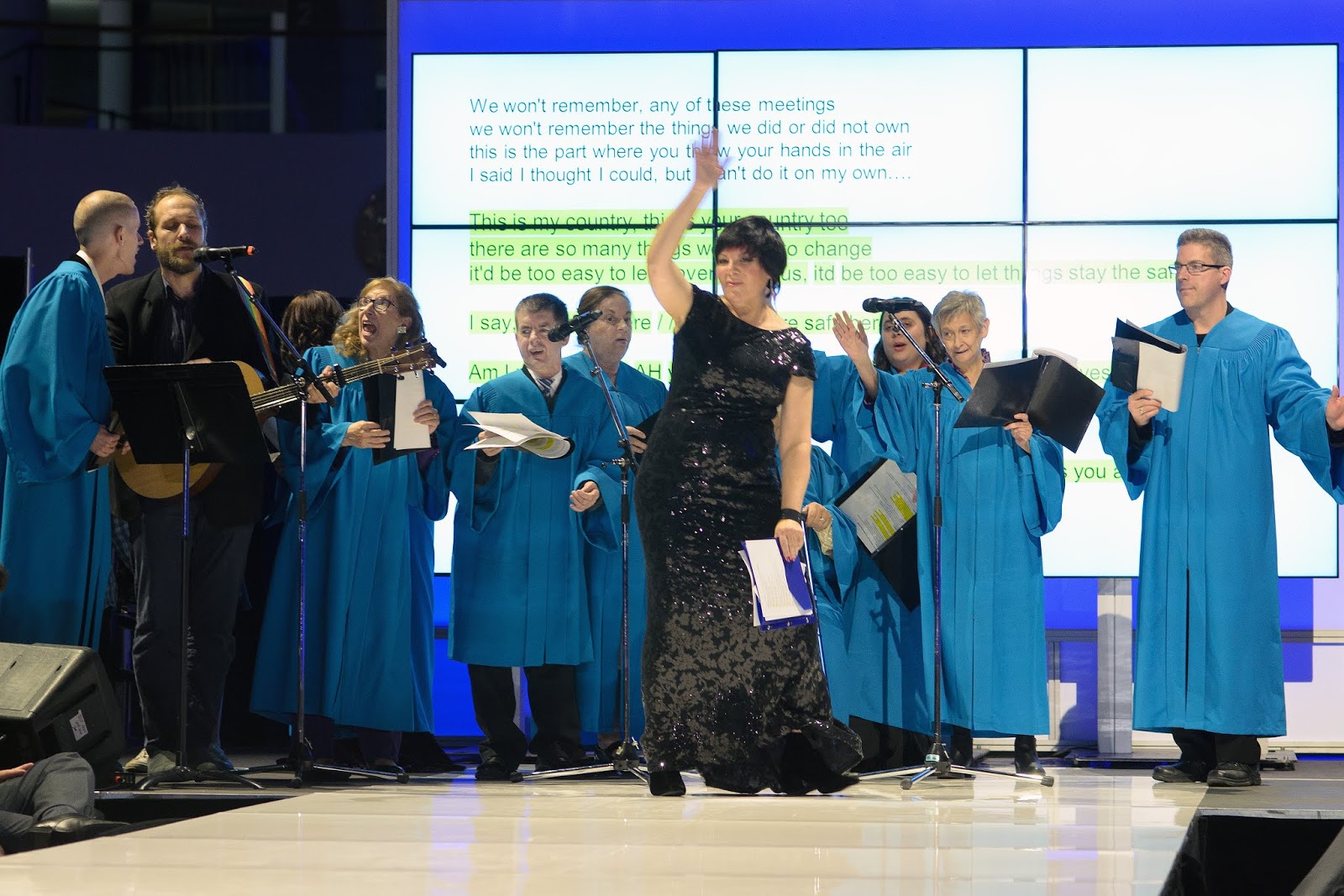 Renee Berezowski, assistant director at the Richard Robinson Academy of Fashion Design, said when Tamir asked for her help in coordinating the event, she knew it would be a “beautiful opportunity” to enable Tamir participants to shine on the runway.

Berezowski enlisted the support of 20 students from her business marketing class to assist in operating the fashion show, from outfitting the models and doing hair and makeup, to assisting with backstage and front-of-house tasks.

Debby Applebaum, a Tamir participant since 2002, was a model at the first fashion in 2017 and took to the stage again this year. Debby said she especially enjoyed getting to try on several “marvelous” outfits, and she “fell in love” with the purple outfit from Richard Robinson she wore on the runway. “Not the airport runway – we didn’t take off by plane!” she joked.

Tamir participant Debby Applebaum strikes a pose on the runway during Tamir’s Stepping Out in Style 2.0, November 4, at the Canadian Museum of History. (Howard Sandler)

Tamir Executive Director Mark Palmer said this year’s fashion show was “truly an amazing event, on so many levels,” and the expressions of delight and pride on the faces of participants and audience members were “unforgettable.”

According to Palmer, many parents who, all too often, have felt the pain of seeing their kids marginalized got to see them receive public recognition for the first time.

“It did feel like a very special moment in which the needle may have been moved – just a touch – in terms of awareness around the cause of inclusion in our community,” Palmer said.

Adam Moscoe, chair of the Tamir Fashion Show Committee, came up with the idea for the first fashion show in 2017.

This year’s show, Moscoe said, “was another high point for our participants, families and supporters, and a chance for many new people to be inspired by our participants, who are true champions for inclusion.”

Did you miss the show? Stay tuned for video highlights, soon to be released!