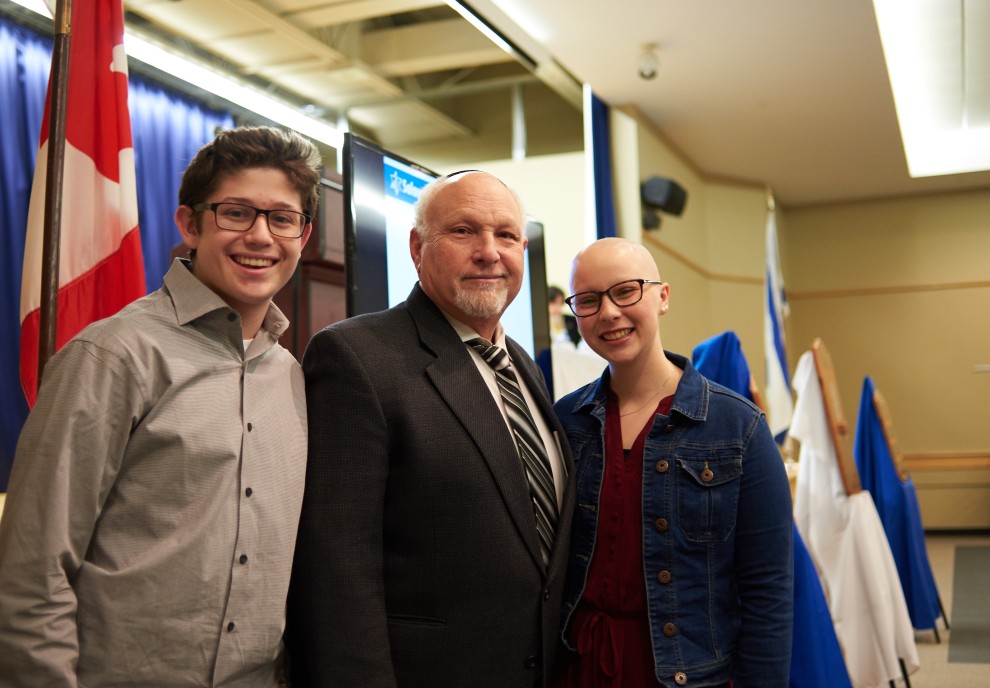 Rabbi Steven Garten received the Ben Karp Volunteer Service Award which honours a volunteer who best exemplifies communal ideals and sets an ongoing example for others. Barry Karp, son of the late Ben Karp, was on hand to present the award.

Best known in the Ottawa community for his 19 years as spiritual leader of Temple Israel, Rabbi Garten has been the director of the SJCC’s Florence Melton School of Adult Jewish Learning for the past five years. A member of the SJCC Board of Directors, he is chair of the Strategic Plan Implementation Committee. He has also been involved with several other organizations in the city including the Multi-Faith Housing Initiative and Faith Partners.

The Grossman-Klein Teen Leadership Awards, for male and female teens who have shown outstanding dedication and service to the Jewish community and the community at large, were presented to Dahlia Belfer and Jonah Leinwand.

Dahlia, a graduate of the Ottawa Jewish Community School (OJCS), is a Grade 11 student at Sir Robert Borden High School (SRB). She is a member of A Ripple Effect and a junior adviser and board member for NCSY. Dahlia is an active member of the SRB Jewish Culture Club and has volunteered for the Food Bank, Breast Cancer Action, ME to WE, and Relay for Life cancer research.

Jonah, also an OJCS graduate, is a Grade 12 student at Lisgar Collegiate High School and is president of the school’s Jewish Culture Club, which recently partnered with the Muslim Student Association to raise funds following the Tree of Life Synagogue massacre in Pittsburgh. Jonah is a regular participant in the Jewish federation of Ottawa’s Mitzvah Day and has attended Torah High. He plays in the Lisgar band, is a math tutor; and is head of the Lisgar Society of Debate where he organizes a speaker series which welcomed MP Elizabeth May, leader of the Green Party of Canada. During winter break, Jonah and his family volunteered to serve Christmas dinner to those in need at a Shepherds of Good Hope facility.

Jonah has worked at JCC of Ottawa Summer Camps and is plays in the SJCC Jewish Men’s Basketball League. He has spent two years in the HeadStart program at University of Ottawa where he takes university math classes and, this past summer, attended Mt. Allison University in New Brunswick as part of SHAD program focussing on STEM-based learning and research.  Since his return from Mt. Allison Jonah has been working with a professor and grad students to develop his invention, AirTree.

During the AGM, retiring SJCC Board members Jack Shinder and Dana Geber were thanked for their service and Lisa Rosenkrantz was welcomed to the Board.