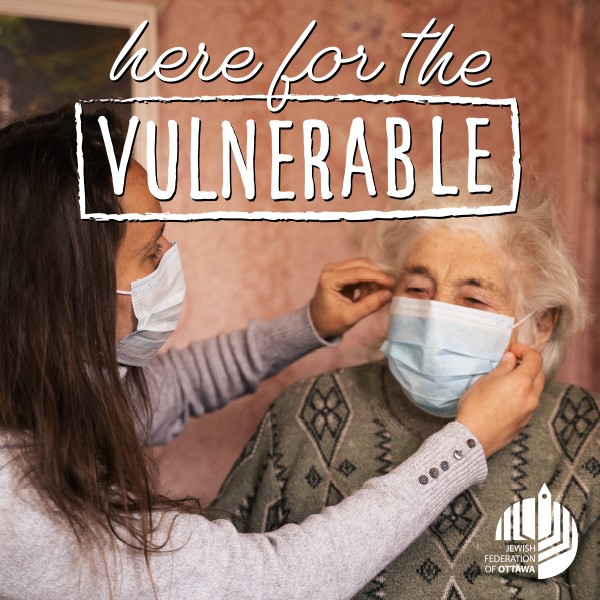 Are you waiting for the phone to ring, or are you the one dialing out? This fall about 160 general canvassers are lighting up phone lines as they reach out to both new and established donors who show their generosity in support of the Jewish Federation of Ottawa’s 2022 Annual Campaign.

This year is Alice Retik’s first year volunteering. Brand new to the Federation’s Board of Directors, Retik knew she wanted to do more to give back to the community.

“I typically do not like asking people for money! It’s quite uncomfortable,” said Retik. “But now that I’m on the Board and I see the depth of support Federation offers to the community, I feel quite passionate about it.”

“At first, it made me nervous to call people and ask for money, but once I started doing it … everyone was so nice and welcoming!” she said. “Generally, I canvas committed donors, so they make it really easy for me to collect their pledges. It makes me feel good to contribute something.”

“Everyone has a different reason about why they give or what’s important to them,” said Retik. “What I find the most remarkable is that a number of the people I speak to have already been pioneers enriching the community, involved already with B’nai Brith, Federation … they’re thanking me for calling to canvas, but I’m thanking them!”

Yudit Simmons, Federation’s campaign manager, said those conversations are the most important part of canvassing.

“Your call is first and foremost an opportunity to make a Jewish connection. The most effective canvases are ones where a personal relationship has been established,” said Simmons, who advises the canvassers that “rather than bothering them, you are giving someone who wants to help the opportunity to give back and providing an avenue to give tzedakah.”

Retik said that understanding that relationship-building aspect of being a canvasser has enriched her experience.

“It’s full circle. I’ve actually made some connections with people in terms of finding out how they’re doing, how their health has been. It’s been really nice meeting people who I otherwise wouldn’t have connected with,” she said.

“I don’t even count that time as my canvassing time,” Retik adds. “It’s nice to have this human contact and to their stories and what they’ve contributed or are contributing now.”

“It makes me feel so good to be part of this, I enjoy being able to do something. It’s always interesting to speak to people,” she said. “Sometimes I know them socially, but most often not.”

She’s been volunteering since about 2016, and this year has already made about 80 calls.

“Some years I call more, some years less … once I’ve done the 20 or 30 assigned to me, I offer to take on any additional ones,” said Sussman Silverman, who also works full time. “A few years ago, there were a whole bunch of leftover donors who hadn’t been reached yet, so I just said send me whomever!”

Because Sussman Silverman is also involved in the Jewish Superhighway in other ways, she is able to answer different questions people might have about Federation’s work and scope as well as that of other Jewish organizations.

“They don’t always know the difference in the organizations, so [one person] asked me how to get a calendar from Chabad, so I helped her out and then she asked about her listing in the Jewish Phone Directory, and I could help her with that as well,” said Sussman Silverman. “I like those kinds of linkages, the interaction between the different parts of the Superhighway.”

Canvassing during the COVID-19 pandemic has been a whole other challenge with many people supporting the Annual Campaign and Emergency Fund for Community Resilience.

“There’s a couple of people, the words I would use to describe them is that they’re incredibly resilient and caring of the community,” said Retik. “What stands out to me the most is people’s resilience throughout COVID.”

For Retik, she hopes to call some of the same people again next year, like Sussman Silverman does. For Sussman Silverman, she said she’ll keep volunteering as long as the Campaign will have her.

To donate or to find out more about the 2022 Annual Campaign, please visit https://jewishottawa.com/giving/annual-campaign.