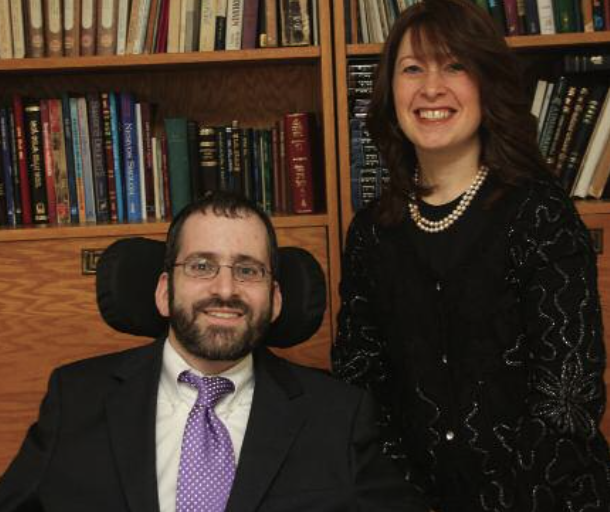 A new book on “Rolling Rabbi” Simes is inspiring the Ottawa Jewish community — and took author Shaindel Simes by surprise.

Rabbi Yehuda Simes Z”L, Ottawa’s “Rolling Rabbi,” died in 2017 — nearly seven years after he was paralyzed and left a quadriplegic after a car accident. This year, his widow Shaindel released a memoir-style book, sharing their story of perseverance and a message of hope.

“From the beginning of the accident, there was this acclamation to our new reality … accepting it and understanding what it meant,” said Shaindel. “As things slowly took shape into some kind of routine, the Rabbi really wanted to get back to his students and to teaching.”

With some adjustments, like a special prayer book that the rabbi would be able to turn the pages of, the Simes family embraced their new normal — all the while sharing their story.

“People really feel that he had a strong message and the way he was facing the adversity and the challenge showed there was a lot to gain from his story,” said Shaindel.

“From his demeanor and candidness and his upbeat optimistic tone, despite agreeing that of course he did have a challenge, people kept saying ‘you should write a book.’ the Rabbi looked at me and he was like ‘yeah’ and I said ‘no’!”

As caregiver to her husband and to their nine children (the youngest born just three months after the accident), Shaindel said writing a book was something they simply didn’t have time for.

“We kind of just laughed at it. But we kept hearing it,” she said. “It started to be this thing in the back of my head. After he passed, we thought about making his blog a book. So as a gift to our children and to my family, in commemoration of the first year of his passing, I had the blog transcribed into a Word document and had that printed just for the family. It was kind of a prelude to the concept of there being a book.”

The idea took off from there, said Shaindel. She investigated writing options, publishing options and all the different bits and pieces that go into publishing a story.

“At first I thought I wasn’t a writer,” she said. “My husband was the one with the forte for words..”

But a chance encounter with another author outside a bookstore encouraged Shaindel to make a few calls to publishers.

“I called a publisher and told them our story and this woman said she had shivers up her spine and told me to go for it. I said ‘I’m not a writer.’ She said just take a piece of paper and sit down and write what happened. Don’t think of it as writing a book, just write.”

Shaindel said she shocked herself with the finished work.

“I think what made it so meaningful was that it was something important to me.” she explained. “I don’t think I’m a creative literary person. I’m not going off to write a novel, but because it was something so personal and meaningful, I think that part comes through. People say they can hear me talking in it.”

And while healing wasn’t the primary goal of writing the book, Shaindel said she didn’t realize how cathartic the experience would be.

“Afterward I did feel like ‘Wow.’ It’s nearly 12 years. It’s been a lot to process and a lot of discussion, but it really did fine tune that journey for me,” she said. “It made it all into something that I can easily look back at now and have it all in one nice place.”

The book was released officially at the beginning of April and so far Shaindel said she’s “incredulously incredulous” about the response.

“I’m not sure that’s a real word, but really people are just unbelievable,” she said. “Direct feedback to us, plus through other people, about how meaningful and inspiring it is, about how really touched they were.”

“People have said “you have to write another book!” But I think, as of now, this is a one and done. Although … I’ve done lots of things over the last 12 years I never thought I would do. “

You can purchase Rolling Rabbi The Power of Perseverance: The Story of Rabbi Yehuda Simes on the Israel Book Shop website and on Amazon, as well as at bookstores in Montreal and Toronto. Shaindel is also the featured speaker for JET's Jewish Unity Live on May 29 and will sign copies of her book at that time. Books must be pre-purchased.