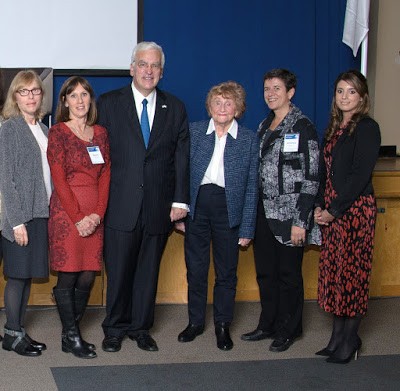 After the Holocaust: Jewish refugees fleeing to Israel interned on Cyprus

“It is our responsibility to preserve the memory of the Holocaust,” said University of London historian Eliana Hadjisavvas, and “it is important to consider the aftermath and long journey” that followed it.

Hadjisavvas was speaking at “From Dachau to Cyprus,” a Holocaust Education Month event, November 27, presented by the Shoah Committee of the Jewish Federation of Ottawa and the High Commission of Cyprus in Ottawa.

She discussed Jewish refugees – Holocaust survivors – confined to internment camps on Cyprus between 1946 and 1949. The camps were created by the British government as part of its effort to stem Jewish immigration to pre-state Israel in the final years of British Mandate Palestine.

Born and raised in the U.K., but of Greek-Cypriot descent, Hadjisavvas said she always had a keen interest in Cypriot history but had come across nothing on the topic of the Cyprus internment camps. Beginning her PhD research in 2013, when little was known, she is now able to tell more about the camps that were “much more than a stopover” on the way to Israel, just 230 nautical miles away.

She showed a British video of first arrivals coming off the ships, “men, women, children and babies.”

The British military ran the detention camps, which were built using German prisoner of war labour, she said. Surrounded by barbed wire and watch towers, the camps were under constant guard.

“But 800 marriages took place in the camps, and there were work programs and cultural events put on by the American Jewish Joint Distribution Committee Relief Mission.”

The High Commission of Cyprus provided a display of photos of the internment camps, and sponsored a reception featuring Cypriot wines and delicacies at the event.

In his remarks, High Commissioner Vasilios Philippou said the photographs “present a dark period in history” and noted that “warm relations developed during tragic times between the Cypriot and Jewish people.”

“Cypriot workers in the camps, as well as locals, helped the detainees get clean water and food,” he said. “Many Jewish refugees tried to escape from the camps and were helped by Cypriots through underground tunnels.”

Noting the upcoming holiday, Philippou added, “Chanukah reminds us that life’s darkest moments and greatest challenges can be bright with steadfast faith and determination.”

The other featured speaker was Toronto-based Holocaust survivor Rose Lipszyc, 90, who was detained in a camp on Cyprus. She was interviewed on stage by her daughter, Professor Carol Lipszyc of the State University of New York, a poet, and author of short stories portraying the historical experience of children during the Holocaust.

“There is a tremendous need and so few of us left,” said Rose, who devotes much of her time to Holocaust education in schools. “Students relate to me because I was a young girl in the war. But if I don’t put in a sense of humour a little, they won’t listen to my story. You can’t have horror all the time.”

Born in Lublin, Poland, Rose was living with her parents and two brothers, who were three and 14 at the start of the war.

“I had a wonderful life until the age of 10, and then it all ended,” she said.

In 1940, Rose and her family were thrown out of their home by the Nazis and forced into the ghetto. She escaped forced deportation from the ghetto in 1942 and survived the war posing as a teenaged Polish worker in a German factory.

“I was liberated by the British and the only place I was going to go was Israel, she said.”

She spent a year in Italy, where she learned Hebrew, history, geography and mathematics, and met her future husband.

“Then we were going to go to Israel on a fishing boat from Venice. When we came close to the borders of Israel, three huge ships surrounded us.”

She was interned in Cyprus for four months.

A member of the Holocaust Survivors Speakers Bureau at the Neuberger Holocaust Education Centre in Toronto and is featured in “Cheating Hitler: Surviving the Holocaust,” a new documentary on the History Channel.