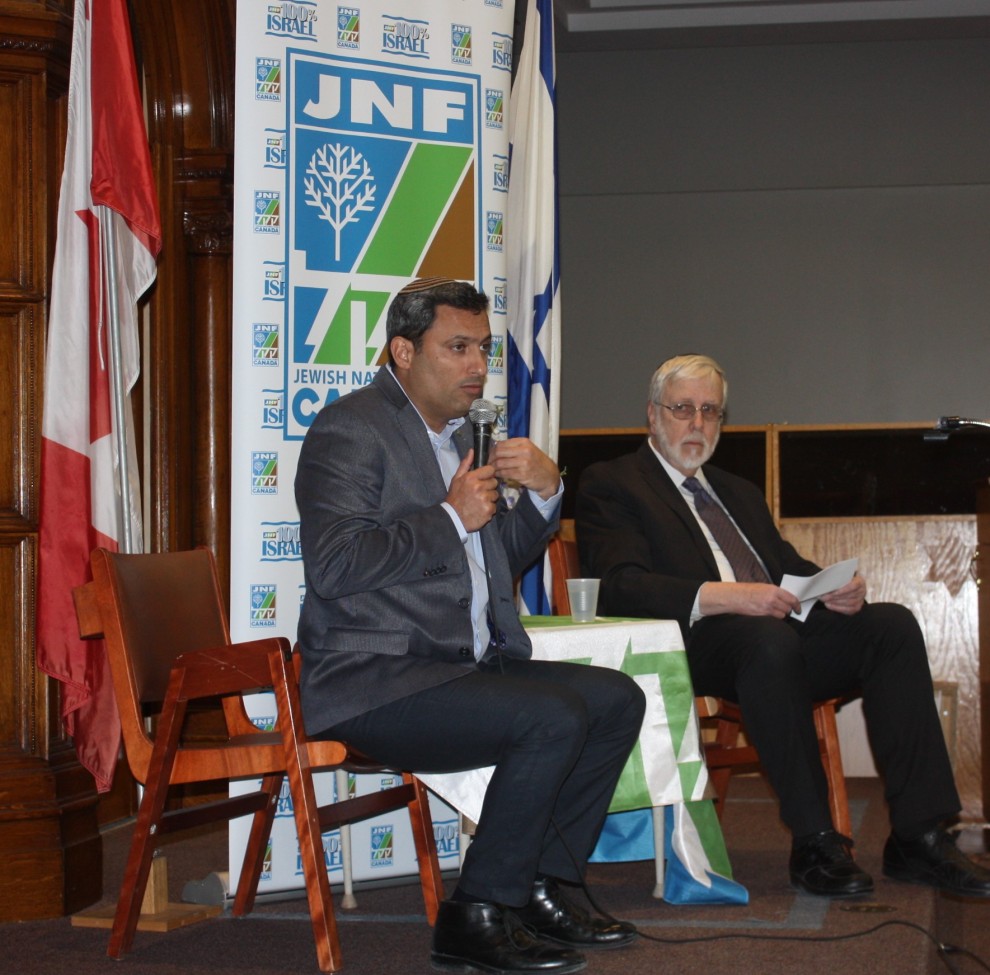 Rockets fired at their city by Hamas and other terrorist groups in Gaza over many years have led to a high proportion of Sderot residents – including almost 40 per cent of it’s children – showing signs of post-traumatic stress disorder (PTSD), said the city’s mayor during a visit to Ottawa.

Mayor Alon Davidi spoke at Congregation Beit Tikvah, March 3, about the impact the Israel-Gaza conflict has had on Sderot. Located less than a kilometre from Gaza, Sderot is the closest Israeli community to the Palestinian territory under Hamas control. The event was organized by The Jewish National Fund of Ottawa.Davidi, who has lived in Sderot for 23 years, was elected to the city council in 2008 and has been mayor since 2013.

“If you went back to Sderot in 2003 you would see no economic development, because nobody would open up new businesses and nobody was coming to the town,” the mayor said.Davidi described Sderot as “95 per cent paradise and five per cent hell,” because of the rocket attacks. “Otherwise, it is a very beautiful town,” he said.

Discussing PTSD, Davidi said even the sound of a door shutting or feedback from a microphone can cause children to freeze and make their faces go white, “because it reminds them of what happened.”

Davidi said he struggles to find a good answer when he’s asked why people would want their children to live in such a dangerous place. “On one hand, as mayor, I want people to come to live in the town and I need to say, ‘This is a beautiful town, please come.’ But on the other hand, I know the truth that many of our children suffer from trauma,” he said.

Davidi said there are two centres in Sderot assisting children suffering from PTSD. The first is the city’s Resiliency Centre, where children receive treatment for symptoms of PTSD.

The second is the Animal-Assisted Therapy Centre, which allows children to work with therapy animals, such as dogs, hamsters and even parrots. Davidi said over 160 children have been helped by this centre, including his seven-year-old daughter, who adopted a dog almost a year ago.

“Three months ago, we had a few days of heavy rocket attacks. My daughter was not frozen or in shock when she heard them. She just took the dog down to the shelter,” Davidi said. “I don’t know if she has fully recovered from the trauma, but being responsible for the life of the dog helps her to move away from her fear.”

Although the number of rocket attacks on Sderot has decreased since Operation Protective Edge in 2014, Davidi said the number of people suffering from PTSD continues to increase, “because Sderot is not a place that you come and go from, it’s the place you live in.”

Asked if children often choose to remain in Sderot once they grow up, Davidi said, “I have seen that people are staying and they love their town… You stay, because you love your city, your community and your families.”

And when asked by an audience member what Ottawa could do as a community to help Sderot, Davidi suggested praying for his city and “thinking about the people, especially the Israeli soldiers, who are the best in the world.”

Davidi concluded his remarks by extending an invitation to Ottawa Jewish community members to visit Sderot when they come to Israel.

Israeli Ambassador Nimrod Barkan introduced Davidi and spoke about Israel’s efforts to stop the rocket attacks from Gaza. “There are no solutions,” the ambassador said, “but things are better.”

Barkan also thanked Davidi for his tireless work on behalf of Sderot and its residents and “for making the city attractive to investors and tourists.