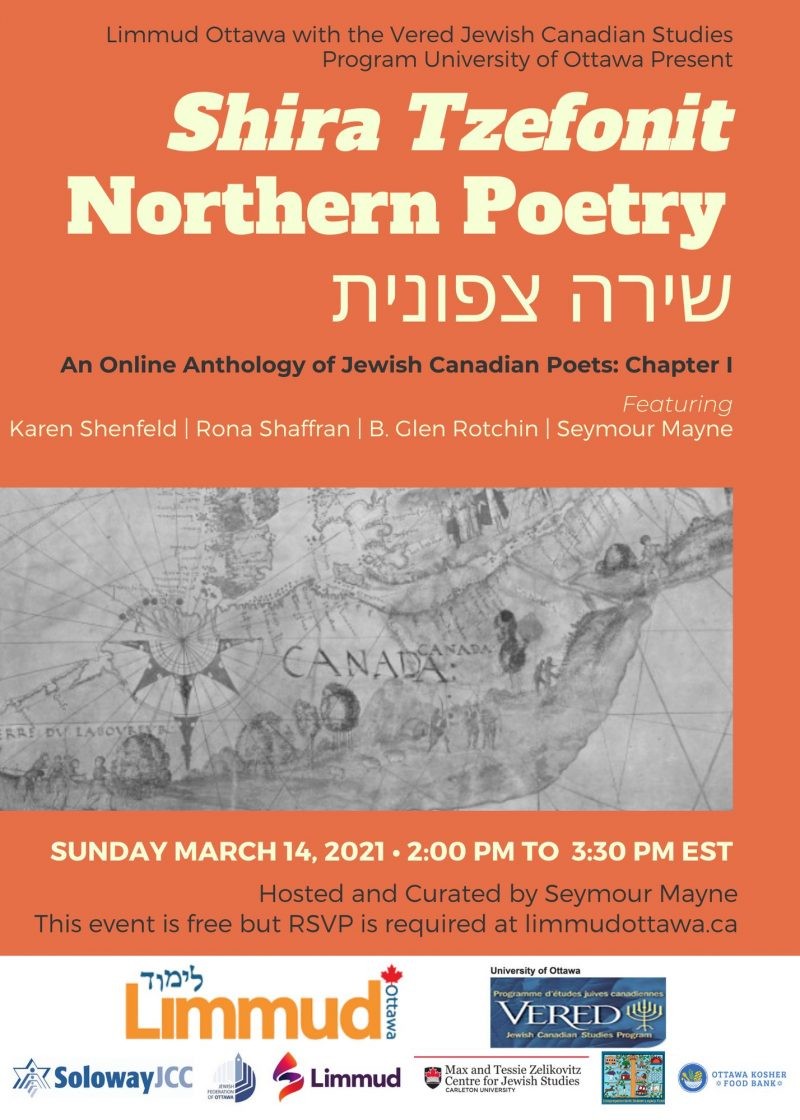 By Louise Rachlis, for Limmud Ottawa

Jewish Canadian poets will be front and centre March 14 in an inaugural online event.

The free event is being presented by Limmud Ottawa with the Vered Jewish Canadian Studies Program at the University of Ottawa.

“In the past, until the 1980s, poetry was the big genre,” says Seymour, whose first book of poetry came out in 1964. “Then the novel came up in prominence and for the past 25 years, poetry is no longer in the cultural radar of Canada. In Canada, hardly any of the media mention poetry. But poetry is still thriving and there are interesting Jewish writers that we should be proud of in the community.”

What he likes about Jewish Canadian poets is that “they don’t just play games with words.”

“They almost always touch people’s emotions and psyches. We have a long history and civilization. We’re more than the ‘selfie’ poets who don’t connect to anything beyond themselves.”

Seymour Mayne is the author, editor, or translator of more than 70 books. His latest collections include the personal anthology, In Your Words: Translations from the Yiddish and the Hebrew. (Ronald P. Frye & Co. 2017), Le chant de Moïse (Mémoire d’encrier, 2018), a bilingual English-French selection of biblical poems, and Perfume: Poems and Word Sonnets (Ronald P. Frye & Co., 2020). He is Professor Emeritus at the University of Ottawa.

Montreal born and raised B. Glen Rotchin has published essays, book reviews, poetry and fiction. He has co-edited two poetry anthologies, Jerusalem: An Anthology of Jewish Canadian Poetry (Véhicule, 1996) and A Rich Garland: Poems for A.M. Klein (Véhicule, 1999). His two novels are The Rent Collector (Esplanade, 2006) and Halbman Steals Home (Dundurn, 2012). He has worked as a property manager in Montreal's famed 'shmatta' district since 1995.

Karen Shenfeld was born and raised in a predominantly Jewish suburb of Toronto. She has had four books of poetry published - the most recent of which, To Measure the World, was released in 2020 by Ekstasis Editions. Karen has also brought her poetic sensibility to the writing of magazine stories and documentary filmmaking. She currently lives in a restored farmhouse in the small village of Magnetawan, north of Muskoka.

Limmud is a volunteer-led festival of Jewish learning, usually done in person. This is Limmud Ottawa’s first virtual event.

Mayne grew up in Montreal in the 1950s, a fact he credits with shaping his creative life path.

“It was the city of the poets, both French and English. It was a wonderful time.”

In the fall of 1985, he launched an anthology of Canadian Jewish poetry in English.

“We had 300 people come to the launch in Montreal; it was a big simcha.”

With the Limmud presentation, he wants to rekindle that excitement that started with Essential Words, his anthology of Jewish Canadian poetry, published years ago.

“We’re a very diverse society and the cultural moment changes in Canada very frequently,” he says. “It’s time to tell the Jewish audience what they’re missing. I’ll be doing an ongoing anthology of Canadian Jewish poetry - this time Montreal, Ottawa and Toronto and next time I’ll do the rest of Canada. I also want to offer a special program on Jewish Canadian poets who live in exile, as it were, outside of Canada; let’s remind people they’re still writing and publishing. In any case, at least twice a year we’ll present this online anthology. And because it’s recorded, people will be able to access it again and again…and teachers may use it in their courses.”

On March 14, Jenny Roberge of Limmud will introduce the afternoon, Mayne will emcee and introduce the poets who will read their chosen work, and he himself will read last.

“I want to bring the poets to public notice; while they read you’ll see the poet and the text,” he says. “In my 70s I’m back proselytizing as I did in the past. My historical role is to be become the preacher and shamash of Jewish Canadian poetry to ensure every writer gets their Aliyah.”

The March 14th Limmud “Online Anthology of Jewish Canadian poets” event is free, but RSVP is required at limmudottawa.ca