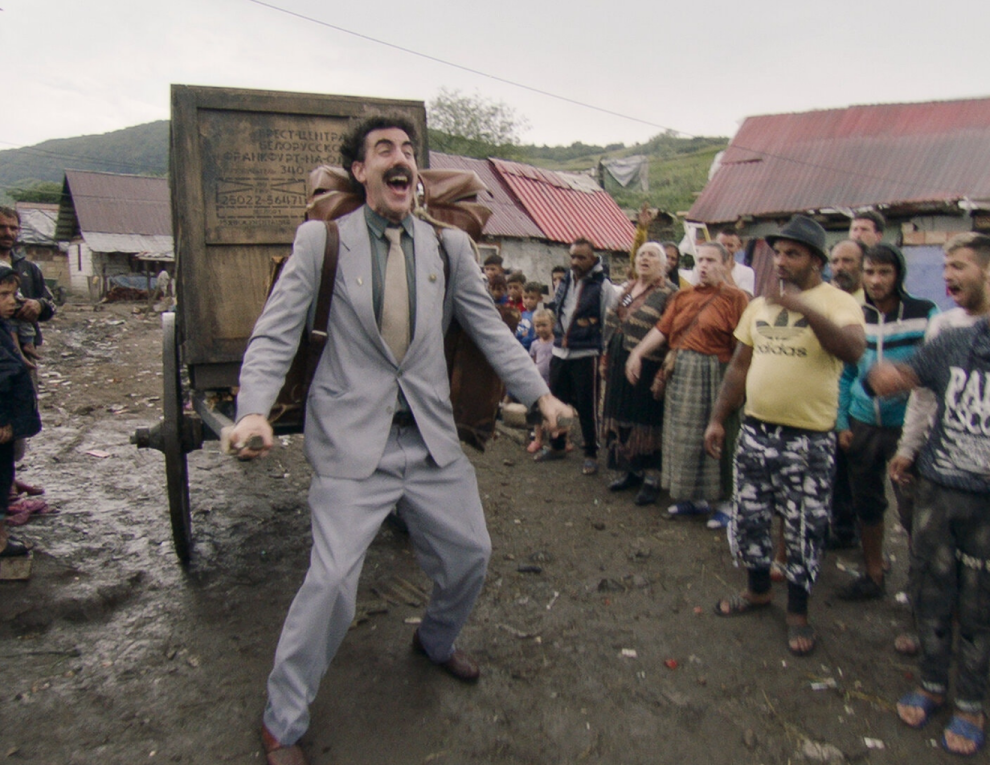 An antisemitic cake, a Holocaust survivor and a whole lot of Hebrew.

Spoiler alert: This article contains information about scenes and plot points in “Borat 2.”

Evans’ embrace of Cohen, who is dressed as an antisemite’s caricature of a Jew, is one moment made for Jewish viewers in a movie full of them.

“Borat Subsequent Moviefilm,” which debuted Friday on Amazon Prime, pillories antisemitic stereotypes and conspiracy theories as it documents the title character’s adventures in an America that has grown only more troubled since he first landed on its shores more than a decade ago.

For the uninitiated, Borat Sagdiyev is a fictional journalist from Kazakhstan who was sent to the United States back in 2006 to make a documentary about the country. Along the way, he tricked unaware Americans into saying and doing very stupid things on camera. (The movie generally takes aim at the United States, but its relentless mocking of Kazakhstan has come under greater scrutiny as the years have gone by.)

The sequel documents Borat’s return this year, with a plan to offer his teenage daughter as a gift to Mike Pence so that Donald Trump will become friends with Kazakhstan’s leader. Much has not changed: The gags are still lewd. The Americans are still easy to dupe, and Borat’s Kazakh is still essentially fluent Hebrew.

But when it comes to antisemitism, Cohen has moved on from just mocking the age-old stereotypes of big noses and global financial domination (although there is plenty of that) to tackling the Holocaust denial and hate that now pervades social media. His advocacy won him a prize last year from the Anti-Defamation League, which condemned the first “Borat” movie in 2006 out of concern that Cohen’s humour, no matter the intention, would help perpetuate antisemitic stereotypes in pop culture.

The new movie shows that Borat has been keeping up with the antisemitism of the times. Here are some of the highlights.

In explaining the context behind his second trip to America, Borat says that the “Running of the Jew” – a fictional antisemitic take on Spain’s running of the bulls from the first movie, which involves mascots in huge masks with enormous noses and other exaggerated features – has been cancelled in Kazakhstan.

“All we have left is Holocaust Remembrance Day,” Borat says over footage of a party full of young people dancing while covered in soap suds, “where we commemorate our heroic soldiers who ran the camps.”

Kazakhstan was actually a refuge for Jews during the Holocaust. But other countries have glorified their Nazi collaborationist pasts, including Ukraine to Croatia to Lithuania.

“Jews will not replace us” cake

In the course of his zany travels, Borat buys a cake to satisfy his country’s “glorious leader.” He instructs the woman selling it to him to pipe a message onto the cake in icing: “Jews will not replace us.”

That phrase was a rallying cry for white supremacists at the 2017 “United the Right” march in Charlottesville, Virginia, that left one person dead.

But if the woman at the bakery recognizes the words, or objects to them, she doesn’t show it. Instead, she pipes the words right onto the chocolate frosting, adding several smiley faces as Borat instructs.

At one point, Borat befriends two right-wing men who take him into their home as they hunker down against the pandemic. Together, they explore social media, finding evidence for their conspiracy theories, and also noodle around on the guitar.

The song they write together ends up being the one that Cohen performed in disguise during a far-right rally in Olympia, Washington, in June.

The movie includes only a snippet of the whole performance, but an extended take that made it to social media at the time includes lyrics saying that “George Soros and his nasty friends” control the news. Soros, the billionaire Jewish philanthropist who funds a variety of liberal causes, is a favorite bogeyman of the right and conspiracy theorists in particular.

In one of Cohen’s more daring moves in the film, Borat crashes the real-life Conservative Political Action Conference, which took place in February, in a Ku Klux Klan uniform – to blend in, in his words. His goal: get to Mike Pence, who spoke at the conference.

“I’m Stephen Miller. Sorry I’m late!” Borat announces as he enters. Miller is Trump’s Jewish senior adviser who is seen as the architect for his anti-immigrant policies. (Borat was ejected during a second attempt to get to Pence by impersonating Trump, in a moment that was caught on tape but did not result in Cohen’s identity being revealed.)

One of Borat’s plans to make his daughter more attractive to Pence involves plastic surgery. In meeting with the surgeon, the doctor suggests doing some work on her nose.

“What’s wrong with my nose? Do I look like a Jew?” Borat’s daughter Tutar asks.

The doctor says no, and Borat exhales with relief. But then the surgeon says Jews look “like this,” and makes a curved gesture around his nose. Borat makes a more exaggerated gesture, and the doctor agrees, saying, “It can be that bad” for a Jewish person.

Tutar eventually discovers Facebook, through which she learns many new things – “like our nation’s proudest moment, the Holocaust, never happened.”

“How dare you say that,” Borat replies indignantly. Here, Cohen is pillorying the spread of Holocaust denial on social media, which the actor has emerged as a forceful advocate for combating.

Facebook announced earlier this month that it would bar Holocaust denial on its platform, two years after founder and CEO Mark Zuckerberg said it was a misguided but legitimate form of expression. Two other social networks, Twitter and Tik Tok, soon followed.

A Holocaust survivor who doesn’t bite

At one point, Borat feels that he has failed his mission and worries about being executed back home. He decides to take his own life – by going “to the nearest synagogue to wait for the next mass shooting.”

He walks into Temple Kol Emeth “disguised as a typical Jew,” as he says, with a long fake Pinocchio-type nose, holding a fake bag of money and wearing plastic bat wings on his back. As he greets an old Jewish woman who is sitting in the sanctuary, he says, “Very nice weather we have been controlling.”

The woman is Evans, a Holocaust survivor who prior to her death this summer spoke frequently about her experiences. She also joined Israel’s pre-state defence force as a teenager, became the youngest school principal in Israel and lost her first husband in Israel’s Six-Day War, according to a website about her.

In a lengthy exchange, Evans elicits Borat’s confession that he is “very depressed.” She gives him a hug and kiss, then says, “You see, I give you a kiss and you are still alive.” Borat wonders aloud whether her venom might take longer to act, but then shares a meal and his story with Evans, who tells him her own.

“But the Holocaust didn’t happen,” he protests. “I saw it with my own eyes,” Evans tells him. He is gleeful in response. “The Holocaust happened, really?!” Borat says, in a scene that seems to make the case for Holocaust education to combat misinformation. “Thank you, Judith. You make me so happy!”

Evans’ daughter has sued to get her mother removed from the film. Deadline reported that Cohen departed from his typical practices and clued her into the gag immediately after filming. The movie is dedicated to her memory.

Photo: Borat Sagdiyev returns to America in the sequel to a 2006 movie about the fictional Kazakh journalist. (Amazon Studios)