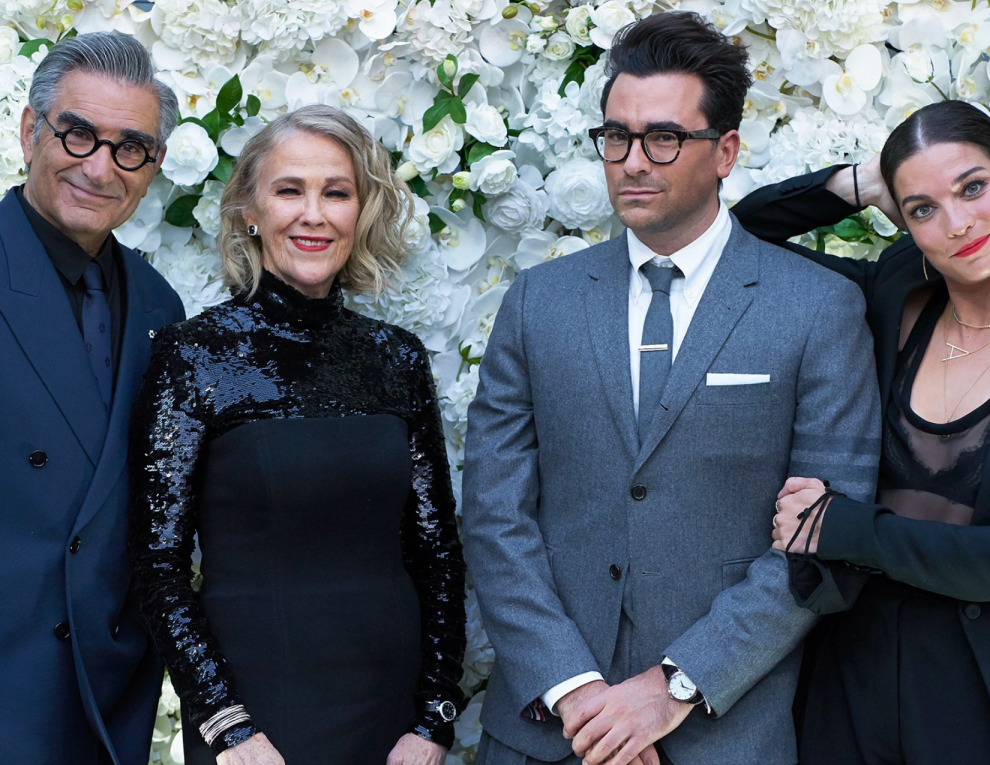 The beloved series won every comedy category for its sixth and final season, and the younger Levy alone won four awards.

This year’s Emmys ceremony was broadcast live, but from nearly 100 streams in different locations. In the first hour of the show, the stream returned again and again to the “Schitt’s Creek” Emmys party in Toronto, where the Levys and the cast and crew of the show had gathered to watch together safely. (The show’s Twitter account shared that all were “adhering to Ontario’s COVID-19 guidelines” and “all in attendance have been in isolation since returning negative COVID-19 tests.”)

“Oh no,” Daniel Levy said at the start of his third acceptance speech, winning for best supporting actor. “The internet’s about to turn on me. I’m so sorry.”

Yet there was little backlash: Much of Twitter seemed overjoyed at what it deemed the long overdue awards for the show.

As radio host Michelle Collins tweeted, the Emmys feel like “feels like Dan Levy’s Bar Mitzvah in the best way.” The first half of the night truly felt like a celebration of all things Dan Levy and “Schitt’s Creek,” and with the awards, the sitcom made history in many ways.

Most comedy awards in a single season

The Canadian sitcom won nine Emmys – seven on Emmy night, and two at the Creative Arts Emmys last weekend. The nine total awards for a single season beats the previous record held by “The Marvelous Mrs. Maisel,” which won eight awards at the 2018 and 2019 Emmys.

The reason for the sweep? The Hollywood Reporter hypothesized that TV Academy members, who vote on the Emmys, binge-watched the show on Netflix – along with the rest of America.

“‘Schitt’s Creek’ had never won a single Emmy for any of its prior seasons. It is widely suspected that TV Academy members, like the rest of the public, caught up with the show on Netflix, which has been airing prior seasons of the show,” the newspaper wrote. “AMC’s ‘Breaking Bad’ achieved major Emmy success late in its run via the same course.”

The show premiered in 2015 on CBC in Canada and on Pop TV, a little-known American channel (formerly TV Guide Network). It didn’t break through the pop culture bubble until it arrived on Netflix in 2017.

With wins for Eugene Levy for lead actor, Catherine O’Hara for lead actress, Dan Levy for supporting actor and Ottawa-born Annie Murphy for supporting actress, “Schitt’s Creek” became the first show to ever sweep all four acting categories in either comedy or drama. The last time a show got close to winning all four was when “All in the Family” won three of the acting categories in 1978.

Plus, three of the four of the actors won their first Emmys – including the comedy legend O’Hara. (Eugene Levy previously won in 1982 and 1983 for Outstanding Writing in a Variety or Music Program for his work on “Second City Television.”

O’Hara’s win was the first of the night.

“I will forever be grateful to Eugene and Daniel Levy for the opportunity to play a woman of a certain age – my age – who gets to fully be her ridiculous self,” she said in her acceptance speech.

Eugene Levy followed soon after, saying “It’s kind of ironical that the straightest role I’ve ever played lands me an Emmy for a comedy performance, so now I seriously have to question just what I’ve been doing for the last 50 years.”

Levy, in true Jewish dad fashion, also shouted out working with his children: “As a dad, getting to work on camera for six years with both my kids, Daniel and Sarah – hi honey! – such a joy, love you both and could not be prouder.” The interfaith Levy family – Eugene is Jewish, his wife, Deborah Devine, is not – mirrors the interfaith Rose family on the fictional “Schitt’s Creek.”

In his acceptance speech for best comedy series, the younger Levy said: “Our show, at its core, is about the transformational effects of love and acceptance, and that is something we need more of now than we’ve ever needed before.”

Levy has spoken at length about his decision to make the world of “Schitt’s Creek” one without homophobia. As he explained to the Advocate, “I have made a very strong point to not ever show bigotry, homophobia or intolerance on our show because to me, it’s a celebration of love. At the root of it, [‘Schitt’s Creek’] is a celebration of love between the family and between the relationships that we build.”

There were a few other Jewish wins. Namely, Jewish actress Julia Garner won best supporting actress in a drama series for the second year in a row for her performance in “Ozark.”

“Wow, first, I’m shocked, to be honest,” Garner said. “I want to show gratitude to all the women in this category. You are the reason why I’m acting in the first place, so thank you.” She was nominated alongside megastars Laura Dern, Meryl Streep, Helena Bonham Carter, Thandie Newton and more.

Jewish actress Maya Rudolph was finally recognized for her comedic work – she went from zero Emmys to two this week. Rudolph won for guest actress in a comedy for her scene-stealing impression of Sen. Kamala Harris on “Saturday Night Live,” and for best voice-over performance for Connie the Hormone Monstress in “Big Mouth,” the Netflix animated comedy about puberty.

Rudolph was actually nominated against herself in the guest actress category for her appearance as Harris and as the judge in the sitcom “The Good Place.” At a news conference, she explained that the role of the judge was modeled on Jewish U.S. Supreme Court Justice Ruth Bader Ginsburg, who passed away on Friday evening.

Other Jew-ish wins: Maria Schrader won for directing “Unorthodox,” the hit Netflix drama based on Deborah Feldman’s memoir of the same name, about Feldman’s departure from the haredi Orthodox world. Schrader took home the only Emmy for the show, which had eight nominations.