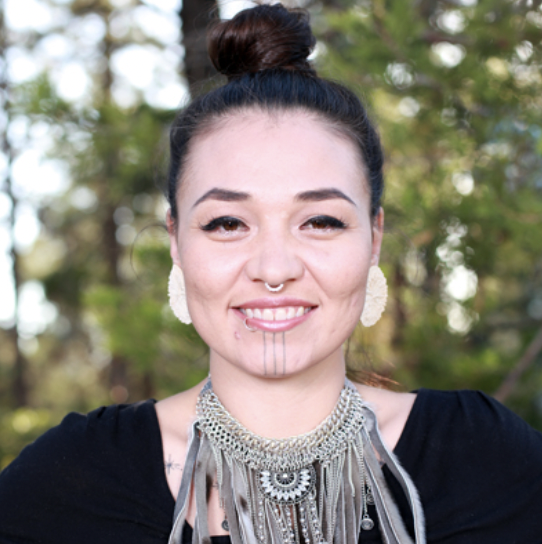 The Ottawa Jewish community was welcomed last week to the second of three Indigenous Awareness Training sessions by Charlotte Qamaniq, who introduced herself in Inuktitut, the Inuit language.

“Unfortunately because of how dominant English is I nearly lost my language growing up,” she said. “During my entire teen years I didn’t speak it. I’ve been working on regaining it. All Indigenous languages should be strong and thriving but that’s not the case.”

Qamaniq is a North Baffin Inuk performance artist, actor, and contemporary and traditional throat singer hailing from Iglulik, Nunavut. She is best known for her work in the throat singing duo Silla, and in twice-Juno nominated band Silla and Rise.

“My way of educating is through storytelling,” said Qamaniq, who is part of the First People’s Group, which customized the training program for the Jewish community. “It’s more impactful.”

She began by explaining the differences among the Inuit, which means “people” in Inuktitut.

“Our ancestors have inhabited the Arctic for time immemorial. There are four different circumpolar Arctic countries where Inuit have lived, and have been colonized by four different countries and governments,” she said. “There are a number of different dialects, different styles of songs and dance, but it’s wonderful when we can gather together. Due to the borders it can be difficult to come together, but we do when we can.”

Inuit are a nomadic people, with one of the largest traditional homelands in the world — from Russia to Greenland. Of the Indigenous people, Inuit were among the last to be colonized.

“We lived nomadically, following the seasons and migrations of animals … Always moving, always hunting,” she said.

Qamaniq also spoke about her traditional face tattoos, a practice which has only recently seen a reclamation.

“There were about 100 years when Inuit were not tattooing, up until as late as the early 2000s. Mostly due to shame,” she explained.

According to Qamaniq, there are about 7,000 Inuit living in the Ottawa area.

“All of our communities are fly-in only. There’s a direct flight from our capital to Ottawa, so oftentimes people come here for medical reasons and postsecondary education.”

Qamaniq ended her presentation with throat singing, which uses sounds rather than words to tell a story.

The first presentation in the First Peoples Group series hosted by the Jewish Federation of Ottawa was by Guy Freedman.

The third presentation is on April 7, featuring Robert (Bob) Watts.

Qamaniq recommended watching two documentaries to better understand Inuit, especially in terms of their hunting and consumption of seal (Angry Inkuk) and about their traditional tattoos (Tunniit).